The Day My Heart Exploded 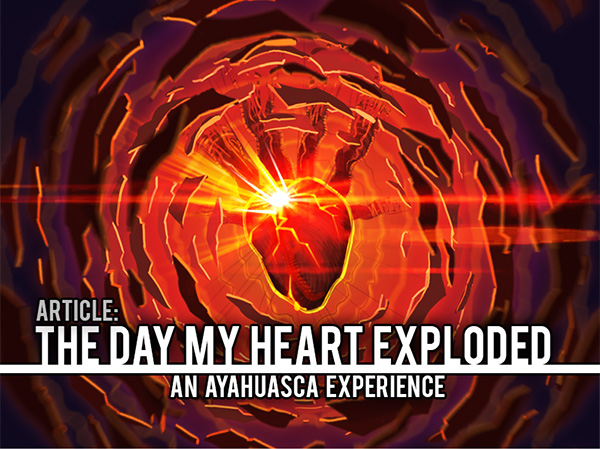 This all happened in a group ceremony, in the Amazon jungle, back in 2014. We, a group of 9, had all taken our dose of Ayahuasca in the maloka and were waiting for its effects. Over the week that led up to this night, my own personal Ayahuasca work had left me in a very positive and elated place. I wasn’t even expecting to drink anymore but I’d been invited by Maestro to join this new group’s ceremony, much to my surprise. In the end, it was a great decision on Maestro’s part. Being in such a positive state, I was for the first time able to experience Ayahuasca without anxiety, that night. It was in fact one of the most positive and beautiful sessions I’ve had so far.

It was largely thanks to one of our new guests, Sandra. She was an experienced Ayahuasca shaman of some 13 years experience, and her style in ceremony was to sing an unending chain of ‘icaros’: The Ayahuasca medicine songs. This was the first time I’d experienced such a persisting concert by a shaman, and also the first time I directly felt the power of an icaro.

Moments after Maestro had whispered to her “Canta, canta…” (“Sing, Sing…”) the stream of tunes began flying from her throat. As the songs went on, one after another, I became increasingly amazed at the vocal acrobatics she was able to perform. Not only were her songs drifting effortlessly from feminine high notes to surprisingly masculine lows, but also, every once in a while, her words were punctuated with what I can only call inhuman sounds. Sounds one would have sooner expected to hear out of a toad, or some other throaty animal, “mmmgulp” came out of her chest without breaking the flow of her words. It was quite something!

Then, as she started into one particular song, I became aware of a subtle vision. The image appeared in my mind of a thin and delicate vine, slowly growing its way across the floor from her position, across from me. Like a stealthy snake, I watched it come straight for me, weaving from side to side and sprouting leaves along its body. When it reached me, it crawled onto my chest, where it then took a downward turn, aiming straight at my heart. Its tip started wiggling against my chest with increasing focus, as if trying to tunnel into me!

Having never experienced something like this, I became restless on my mat. Trying to escape this little intruder of unknown intent, I turned my back towards both Sandra’s singing and the vine. I rolled onto my side but the vine grew over-and-around me, where it continued to aim at my heart … So I turned again, and now found myself on all-fours, facing the floor and breathing more heavily, while I debated whether or not to allow this thing inside of me. Her song went on and was inescapable. Ever-persistent as good medicine is, before long I was aware of that vine again, now on the ground beneath me, and growing upwards towards my chest.

Taking slow, deep breaths, I chose to stay still and observant when the vine once again made contact with my chest. Then it continued to grow, right into my body! I became aware of its nimble tip working its way through the cracks and imperfections of my heart’s various shells and defences. One wall after another, the vine was penetrating my elaborate fortress with alarming ease! As it dug deeper, reaching my most central layers of armor, I became concerned. How could anything so easily pass a lifetime of fears, lies, resistance, insecurity and masks?! This vine was an expert infiltrator – “Robber in the castle!!”

I began to moan as I tried to fight it away and seal my heart, but it was too late! It was moments from reaching my deepest core and I was now confronted with an old fear.

The great power which lies at the center of my heart. It had always felt like such a power that it could level a city, if I ever let it out of the cage. Hell, it could slice this planet in two if I ever let if off the chain! This gargantuan, unknown power I’d spent a lifetime building walls around; not only to keep enemies out, but to keep it in. And moments from ‘now’, this vine would crack the tank! “Huuuhhhhh….” “Huuuuuuuuhhhh…” I struggled out loud as if I were about to vomit. “What is Sandra doing to me? Is she sure it’s safe to release this here?! I don’t even know what it is!”

But there was no stopping it. The power of this song. Finally, the tip of this little vine made contact with the deepest center of my being. All at once, it came out of me! Like pricking the bottom of a water-balloon, I felt my heart fall open onto the floor. A great surge of power came out of my chest, spilling onto the ground between my hands and, like a great flood, filled the entire room with ‘something’. The ‘something’ was ‘me’. The power of my heart filled the room and spilled out the windows into the forest!

When it happened, a collective gasp filled our previously-quiet space. Everyone in the room reacted with sighs, moans, and elated cries! But how could that be? Did they feel what had just blasted out of me? How was this possible!?

There was no time for questions. A process was underway as organically unstoppable as a passionate orgasm, and I could do nothing now but feel it, do it, watch it happen. Oh god. It gripped me again; another surge of power pulsed out of my chest and filled the room like an explosive shock-wave. Another ripple of sound came from the mouths of everyone in attendance. Ten, Twenty, Thirty more times it came. With each one, my resistance weakened. With each one, I embraced the craziness. Finally my arms and legs gave way and I flopped onto my stomach, in surrender. The surges kept coming through me and I became a passive observer to it all.

Then, laying there with my face smeared over my pillow, the surges became less like explosions and more like great waves from my heart. With the next pulse I heard a voice softly muttering words: “I love you all”. And with the following surge, more words “You are all beautiful”. And then another “Healing for all”. Each one followed by that collective gasp, rippling through our maloka. Exclamations of joy, of amazement, of pleasure, healing, comfort, release, gratitude … Smiles and tears.

Eventually, I realized it: This voice I was hearing was my own. My mouth was speaking these words, completely apart from my mind. Something else was now speaking through me and I was doing nothing but standing out of its way. Something which spoke from so deep in my heart that it was somewhere else, galaxies away from ‘me’. Like the mind of the universe.

This felt every bit like the voice of ‘god’! …Oh god…

It wasn’t stopping. It was beyond my stopping. I was barely ‘there’ anymore, just moments away from passing-out after birthing so many intense waves of power. That’s when I heard Maestro and Sandra approaching me in the darkness, whispering to one-another with some sense of hurried excitement in their voices. When Maestro arrived by my side, I heard a sound like a dozen people rushing to surround me, and the wooden floor trembled beneath their heavy feet … His spirits were at-hand. Then, a flash of light with the sound of a match lighting in Maestro’s hand, before he held it to my face and asked “(name) you ok?”. I took control of my mouth for a moment to whisper “Si…” Just before the next wave blasted out of my chest like a volcano.

Maestro staggered with an “oof!” and Sandra’s gasp sounded filled with emotional tears. Standing near me, the impact seemed overwhelming even for these experienced shamans. What was this?! More hurried whispers between the two of them, interrupted by another wave from my chest … A fresh batch of tears in Sandra’s voice … What were they talking about? I only understood one word, when Maestro spoke to Sandra decisively “…no, colaboración…” – (“No, we did this together”). Soon after, Sandra left the space in tears. Another volley fired out of my chest-cannon and Maestro staggered back a step.

Such a power that can knock a shaman off his footing. What is this thing, which lives in my heart?

The memory ends with the sound of Maestro whispering some kind of prayer over me. The smell of his tobacco smoke wrapping me in a cloud of aroma. The process eventually slowed and I was left a melted pile on my mat.

So. What the hell was all that? I can’t say much more than what’s already written above … Maestro’s constant message is that Ayahuasca work is the work of opening one’s heart. When a person finally reaches that open state, the gate opens to all kinds of amazing and impossible things. I guess we saw a piece of it, that night.

The next morning, while we all began to wake-up on the floor of the maloka, I watched Maestro when he stood and headed for the exit. When he got to the door, he stopped and turned to face me, far across the space. He put his fist to his heart, and then threw his hand forward, opening it wide. A gesture representing one’s heart blowing-open! At the same time he said “Whuaaaahhhh!” – and with that eager smile of his, he just walked away.

Later that morning, I told Sandra about her song breaking into my heart, which had started that whole process. She responded “That’s very unusual, for a person to know when a song is directed at them. You must be extremely sensitive to energies.” – So as it turns out, she’d been singing that particular song specifically for me.

As for everyone else in the room, it would seem they were so deep within their own Ayahuasca journeys that they hadn’t been directly aware of me. None of them knew that each of them had been reacting to a single source of energy, blasting them with love and healing that night.

I sure as hell don’t know exactly what it was. All I know for sure is this: Everyone in the room felt it. The day my heart exploded!