The Ayahuasca Dieta And Sex 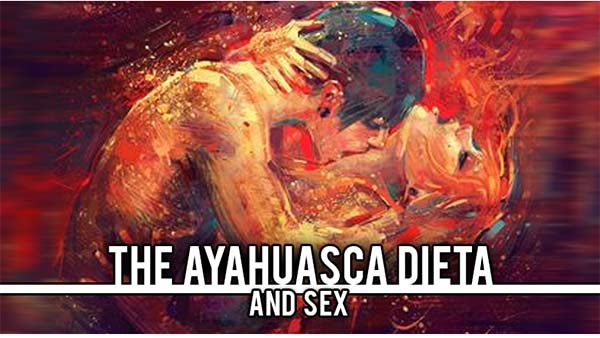 This can be a difficult task in an isolation dieta, given days/weeks of distraction-free quiet time, all alone in a sunny jungle. One soon starts to question exactly why we can’t grab a quick orgasm to pass the time. So it’s one of the most common questions asked by my clients: “Why no sex?” – Is it for any good reason, or just some arbitrary religious-style rule?

I’ve struggled with the same question, and here are the answers I’ve observed so far:

Speaking from a male perspective; I know the boys know for a fact that our minds think completely differently before-and-after orgasm. It’s a real Jekyll-and-Hyde situation! And that shows just how chemically different the pre/post-orgasm bodies are. I can only assume it’s the same for the ladies as well, if even to a lesser intensity. Further, orgasm seems to create a massive reset to the internal chemical state. I’ve often observed that something like a heavy marijuana effect is largely cleared-away by orgasm, as well as other internal states such as frustration, tension or mental-fog. Orgasm seems to wipe the slate clean and sets everything back to zero.

So imagine throwing an orgasm into a situation where you, the medicines and energies are trying to move things around, build new thought-structures, and do delicate re-alignments that need time to settle. Right – it all comes tumbling down! Putting orgasm aside is an act of respect to the work being done within, and giving things their time to ‘cure’ and become permanent.

Make no mistake, this first point is the most important of the entire article!

In many ways, the dieta is a great mental exercise for dominating one’s runaway wants, needs, and impulses. Once again speaking for the boys; at least one orgasm per day is the common norm, if not more. There are many things to be learned from resisting such a persistent impulse for weeks-on-end.

So what’s the use in learning this? Well firstly it drastically lowered sexual temptation while in-dieta and made ‘going without’ much easier. Learning to stop sexual chemistry at the seed-stage, by not indulging or initiating fantasy, all but eliminated the occurrence of attention-demanding erections … It showed me just how often I was creating the sexual moment out of boredom or restlessness; how much time and energy I was burning with it. It also sent me back to society able to exercise more control over my sexual choices; or at least now being aware that I was entirely responsible for creating any ‘unstoppable’ sexual situations I may later regret. Accepting responsibility sucks, but it also allows one to own the control they were previous surrendering.

It also bears noting that when it comes to apprenticing with plant-medicine, the sex-free challenge is used as a major gauge of self-control – Self-control being so important to prove before attempting work with the more powerful plants/energies. It is said that the levels of power one eventually acquires come hand-in-hand with a lustful urge to abuse said power. The sex-fast of dieta seeks to test one’s strength-of-will against such forces. The dieta system is, after all, originally designed for apprenticeship.

But even for non-apprentices, seeing how you handle this challenge does teach you much about yourself.

Spending so much time resisting sexual thoughts, being very aware of when they choose to show up, what they contain and what caused them to appear, exposes many details of one’s inner workings. It’s a great chance to have a look at your whole psycho-sexual map, as it becomes greatly highlighted with ‘energetic swelling’.

With enough observation, you may come to identify any number of negative mechanisms motivating the sexual impulse, such as seeking acceptance/validation, a sense of insecurity, escapism from reality, or a drug-addict-like dependence on orgasm. When in place, these kinds of complex are at work in all our relationship/sexual life-choices, and are often a source of problems in finding a healthy, lasting relationship.

Further, allowing a great amount of internal sexual pressure to build can also help to reveal deeply hidden emotions or memories, and other issues which connect to one’s sexuality – As the energy has no other means of escape. Think of it as filling a balloon with water until any tiny faults in the surface spring a leak. Many of us also use sexual release as a kind of pressure-valve, to release tension around unaddressed personal problems of a non-sexual nature. Removing this crutch can bring some very nasty repressed issues to the surface, where they can be dealt with. But dieta is the best time for these issues to arise, as it’s a time of radical self-work.

As such, forbidding sexual release can act as a tool for diagnosing one’s psycho-sexual system.

This point is very simple. Undertaking dieta puts one in a somewhat weakened state. With energy being at a premium, such an effort as orgasm is best avoided. Further, the eventual build-up of sexual energy can translate into increased energy in all other systems, including stamina under the effects of Ayahuasca.

Strictly speaking, all forms of physical contact are also a no-no in dieta. Handshakes, hugs, kisses, anything like that. This has a variety of reasons but avoidance of sexuality is definitely part of the equation.

Here’s a personal example, to illustrate: I was once in a dieta, a little restless but making good progress. At some point in the later days, someone came by to deliver my meal. I stuck my head out of the mosquito net to receive it, and found it was someone I’d never seen before. I still remember my vision panning slowly up the feet, the legs, hips, torso, the arms and finally the face of … One of the best specimens of human beauty I’ve ever seen! Stunned and bedazzled, I received my bowl with thanks, but before this beauty could leave my little world I just had to do it … I stuck my hand out “Hi I’m Pedro” – “Hola I’m so-and-so” they replied, but I didn’t hear it. I just wanted to touch hands, entirely knowing I wasn’t supposed to, and it was definitely because of attraction! I savoured that forbidden handshake in slow-motion, even as our palms released and slid against each other in retreat. So soft and lovely was the touch, until the tips of our fingers came to part, but not without my final attempt to hook-fingertips … (Don’t go) … And then I was left alone…

Unable to shake that beautiful face and constantly re-playing the delicious detail of that delicate handshake, I broke the diet that very night by masturbating. From there the entire diet soon failed, as I spiralled into more and more little acts of ‘cheating’ and generally checked-out of the whole process – It was absolutely my sexual system bucking the dieta, at the root of it all. The whole dieta ended in a shameful wash-out that almost cost me my apprenticeship opportunity. Once I got back to town, I also flew into a spree of bad sexual choices/habits, months-long depression, physical illness and overall messiness. It all somehow stemmed from the lingering memory of that encounter at my tambo. As crazy as it seems, so much personal progress was lost by one decision to shake a hand, mid-dieta.

This is the temporary fragility of the work one does with Ayahuasca and the plants. Especially while still in-dieta, one is in an extremely open and sensitive state, so the smallest mis-step can collapse all your good work and actually leave you in a worse state than before.

If you care about your progress from a dieta, take it from me, don’t tempt sex! Leave it completely alone!

So you hopefully made it through your dieta without cheating – Great! Now it’s time to go back to society, brimming with power and unreleased sexuality. You just might head straight to the local bar and jump in bed with the first thing that looks at you! Enter the ‘post-dieta’ to throw some water on things.

Many dieta facilitators prescribe an extended period of continued restriction, for 1-2 weeks following a normal dieta. Though food options open up nicely in the post-dieta (including most meats, spices and salt) sexuality on the other hand remains off-limits. As described above, this can be viewed as a practical thing; time for the body and self to ease-back into an ocean of temptations in food or flesh, without going overboard.

For the Ayahuasca apprentice, this also acts as a period of increased self-control challenge. The game changes from “control yourself in isolation” to “control yourself while surrounded by temptation”. To add even more pressure to the challenge, someone coming out of a proper dieta also tends to be extremely, mysteriously attractive to others…

In all cases, the best perspective to hold about post-dieta is that it’s not separate from your dieta just because you’re back in your long-lost world. In fact this is an important re-integration period, where you meet all your old habits, patterns and problems, hopefully ready to make any changes realized in-dieta. Those first weeks you spend back in your life are the most crucial, to enact lasting changes. Making a commitment to follow the post-dieta not only has practical benefits, but also acts as a personal symbol of dedication – Assigning a short time to feel-out the new you, without surrendering yourself to tempting influences such as sex.

If one cares to preserve as much progress as possible, from their time with Ayahuasca, it’s definitely a good idea to hold your horses for a little while longer.

The more I analyze the dieta, the more I see that each facet of the experience has benefits, even on its own. Combining everything into one experience however, and adding Ayahuasca to boot, is a recipe for tremendous self-work! This is why dieta remains my preferred way to work with Ayahuasca.

I hope this article has been helpful, fellow-human. The next article in this series will look at the dieta and social isolation.